The 2017 LPTW Awards Celebration & Big Mingle was a huge success, with the awards at the TimesCenter (with thanks to Prospect Theater Company) and the Mingle directly afterward at Sardi’s, sponsored by Planet Connections.

Despite the torrential rain, a fabulous time was had by all, with eloquent speeches, heartfelt gratitude, and beautiful music. The entire event was produced and directed by our VP of Programming, Shellen Lubin, with performances directed by Cara Reichel.

Congratulations to Catherine Porter, who was our Big Mingle raffle winner! Thank you to Wilburton Inn and the Williamstown Theatre Festival for their raffle donations. 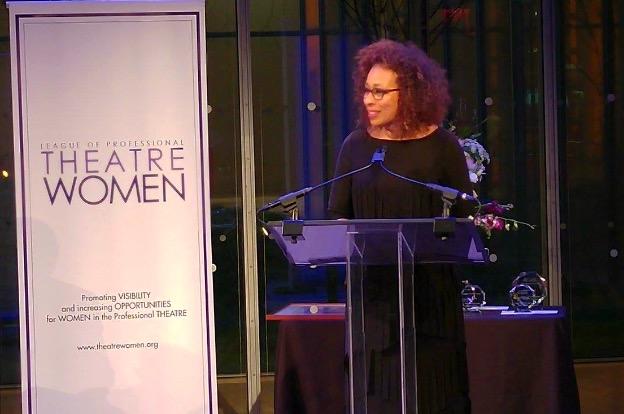 Luminary of stage and screen, the electric actress Tamara Tunie, known to many for her work on Law & Order: SVU, hosted the LPTW’s 2017 Awards Celebration & Big Mingle on Friday, March 31st at The TimesCenter in New York City. 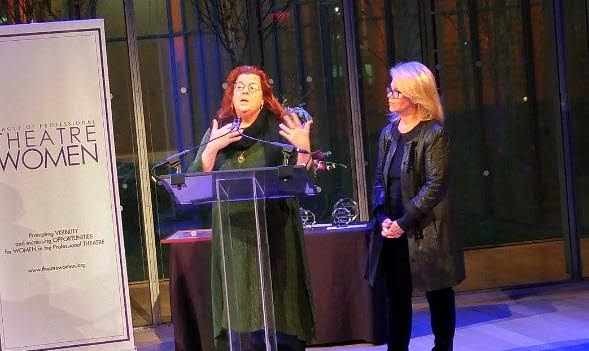 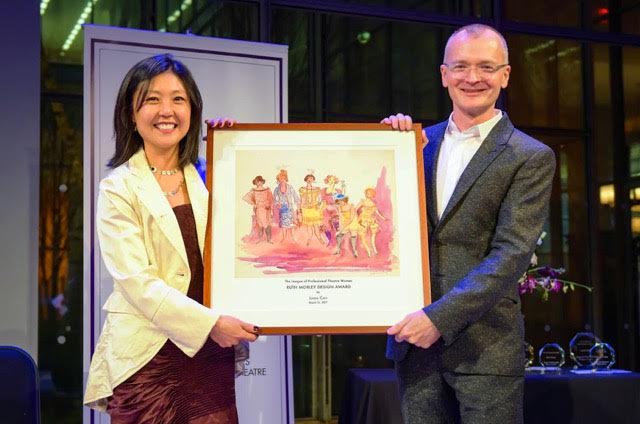 Costume designer and Tony Award-winner for A Gentleman’s Guide to Love and Murder, Linda Cho is honored by the LPTW with the Ruth Morley Award for Design, presented by her collaborator of 20 years and 50 projects, Tony Award-winning director and Artistic Director of Hartford Stage, Darko Tresnjak. 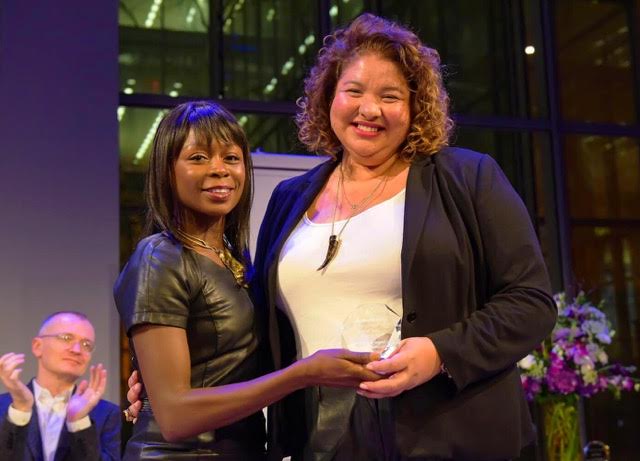 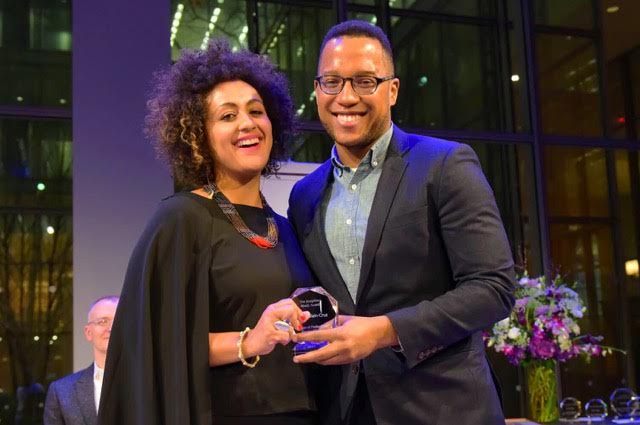 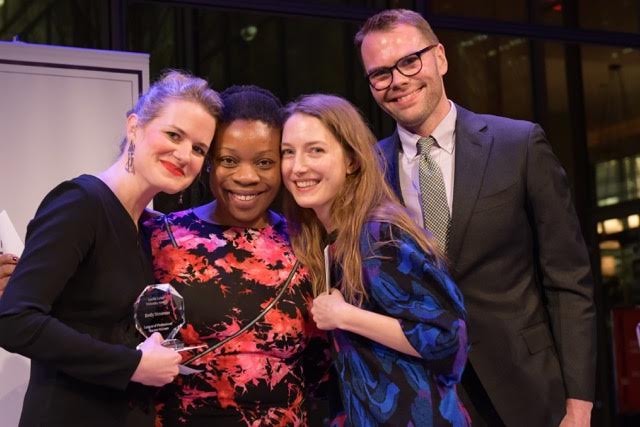 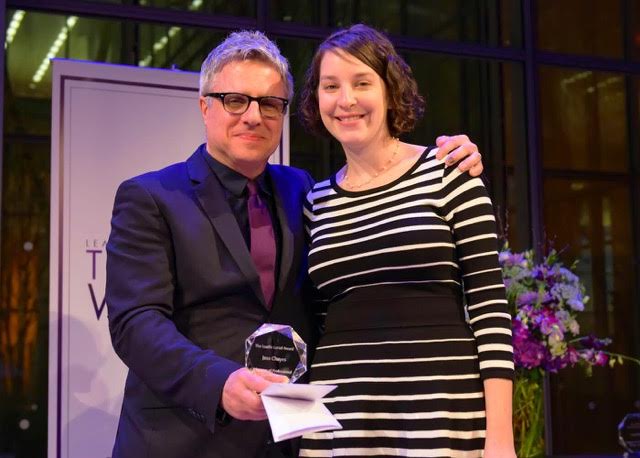 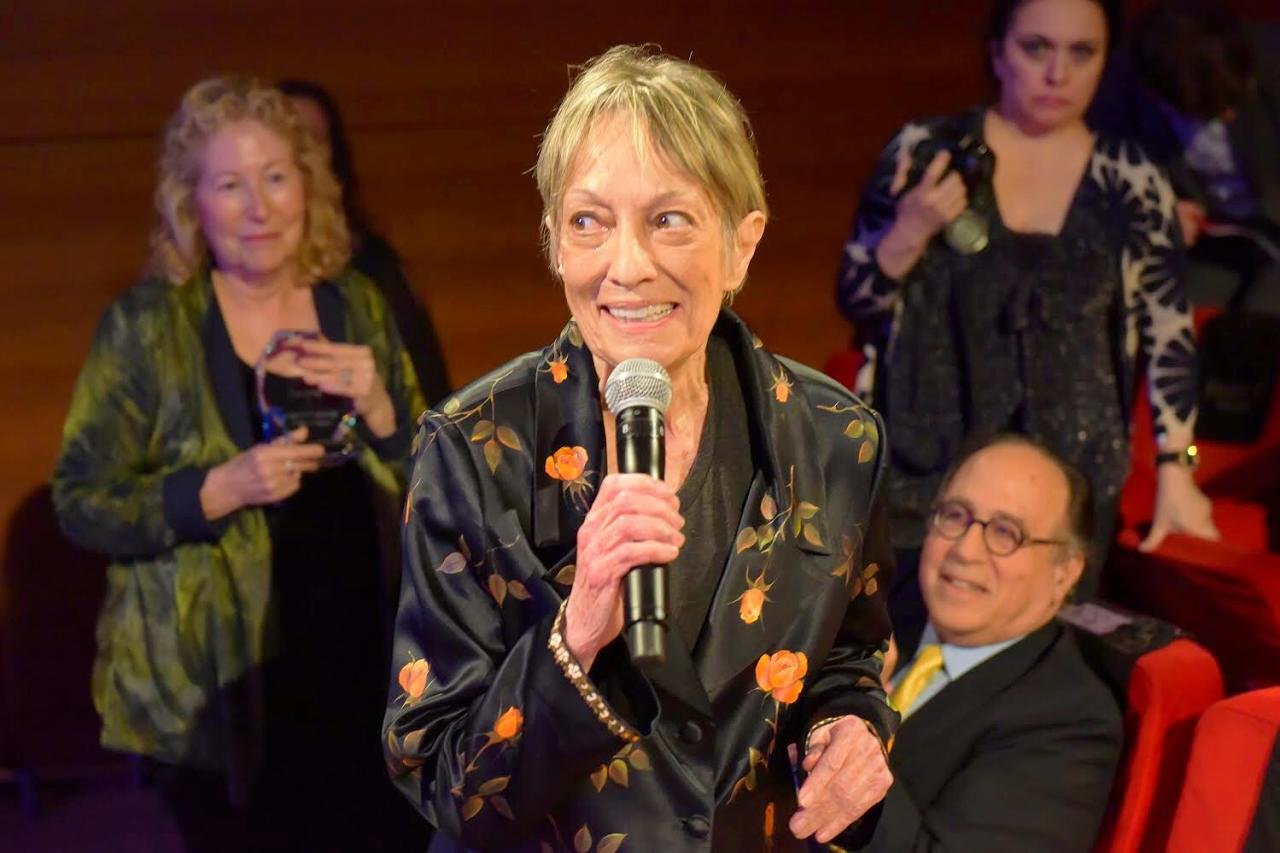 Legendary composer/songwriter Carol Hall, known for songs like Jenny Rebecca and Hard Candy Christmas, as well as the musical Best Little Whorehouse in Texas, was moved as she accepted the Lifetime Achievement Award from the LPTW, presented by friend and colleague Julie Gilbert, pictured left. Carol’s husband is pictured right. 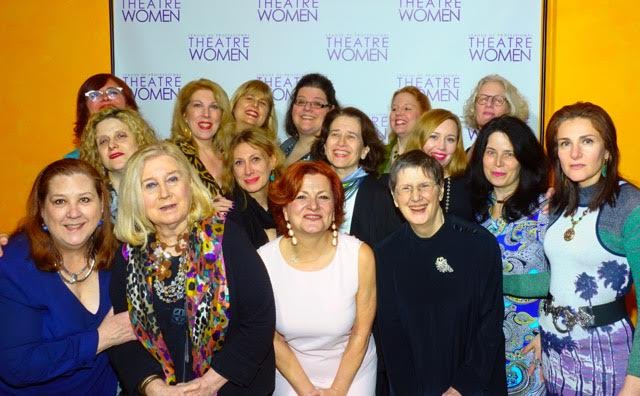 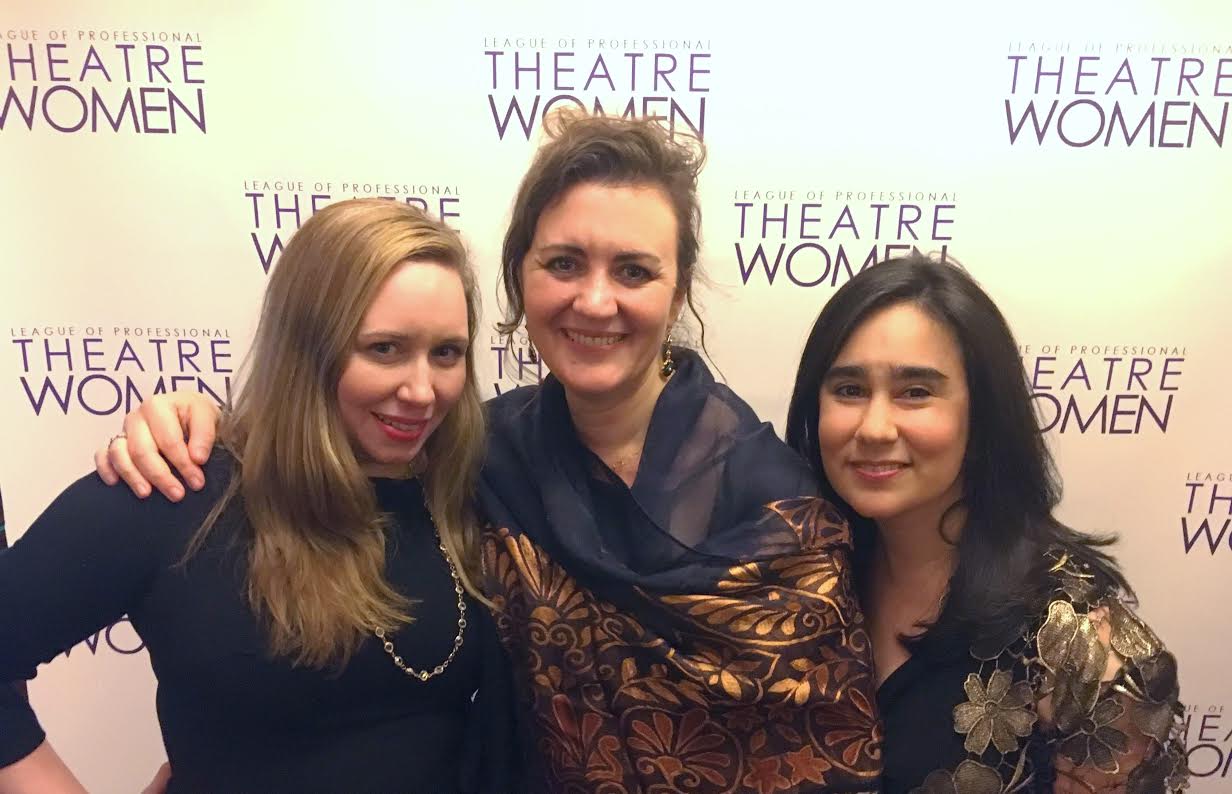 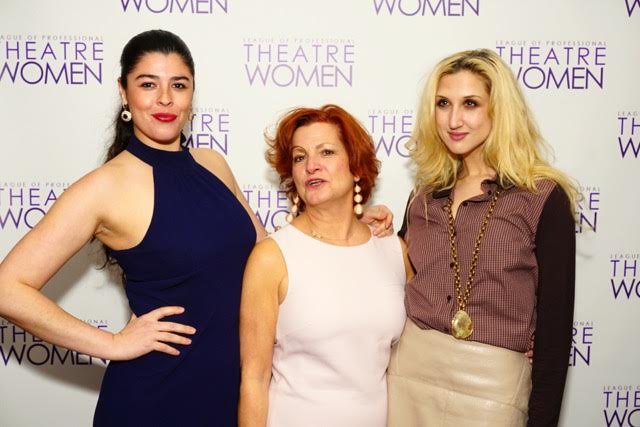 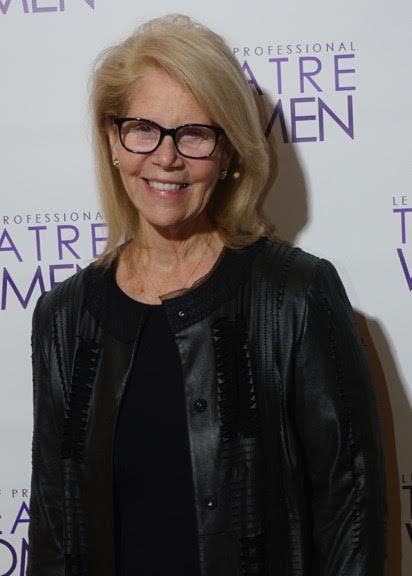 Broadway Producer and ten-time Tony Award-winner Daryl Roth shares sage advice with the LPTW in her role as Co-Chair of the Advisory Council. 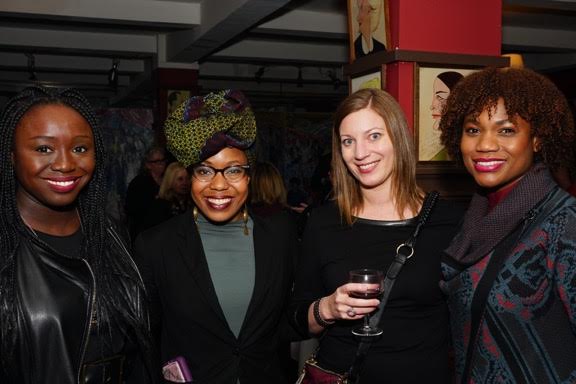 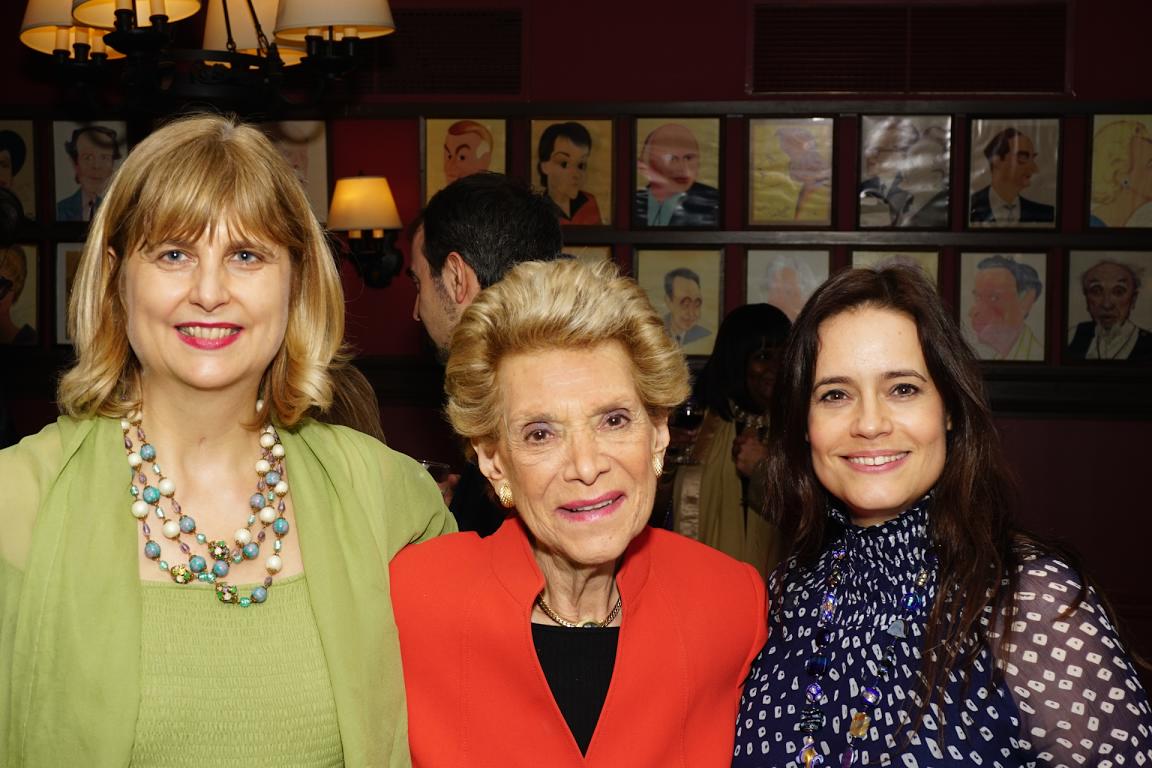 CLICK HERE to read about the event on Theater Pizzazz

A little something about the awardees:

Carol Hall’s songs have been performed by such extraordinary singers as Tony Bennett, Barbara Cook, Barbra Streisand, Chita Rivera, Mabel Mercer, Marlo Thomas, RuPaul, Frederica von Stade, Kermit the Frog and Big Bird. Her Broadway musical The Best Little Whorehouse in Texas won two Drama Desk Awards, a Grammy nomination for its cast album and became a popular film starring Burt Reynolds and Dolly Parton. Dolly’s recording of Carol’s song “Hard Candy Christmas” generated an ASCAP “Most Performed Country Song” Award. Recently, Cyndi Lauper recorded it with Alison Krauss, and this season, Reba McEntire included the song in her “My Kind of Christmas” CD. The song is listed among “The Best Christmas Songs Ever.” WHOREHOUSE continues to be one of the most endearing and popular musicals performed around the world.

Other theater scores are: Good Sports (Goodspeed Opera,)  Are We There Yet? (Williamstown Theater Festival,) To Whom It May Concern (Off-Broadway) and (lyrics) Paper Moon (Paper Mill Playhouse,) and, most recently, lyrics for a musical based on Truman Capote’s classic story A Christmas Memory (book: Duane Poole, music: Larry Grossman.) A particular joy of Carol’s is writing for children. For ten years, she wrote for Sesame Street and was one of the major contributors to Marlo Thomas’ ground-breaking “Free to Be… You and Me”  (Emmy Award, Gold album). Her first non-musical work, The Days are As Grass, is licensed by Samuel French. Hall is a Lifetime Member of the Dramatists Guild Council and a major supporter of the Dramatists Guild Fund.  www.carolhall.net

Jess is a Brooklyn-based director and founding co-artistic director of The Assembly, with whom she has co-created and directed eight original productions, including I Will Look Forward To This Later (New Ohio Theater/IRT Theater Archive Residency) and HOME/SICK (NY Times and Backstage Critics’ Pick). Recent directing includes Half Moon Bay (Lesser America), Primal Play (New Georges), The Bachelors (Williamstown Theater Festival), The Sister (Dutch Kills), and The Netflix Plays (Ars Nova). She has developed new work with The Vineyard Theatre, The Playwrights Center and New York Theatre Workshop, among others. Jess is a NYTW Usual Suspect, a co-founder of The New Georges Jam artists’ lab, and alum of The Civilians R&D Group and the Soho Rep Writer/Director Lab. Associate Director on Peter and the Starcatcher (Brooks Atkinson Theater and New World Stages) and Misery (Broadhurst Theater). www.jesschayes.com

Emily is an entrepreneur, teacher, facilitator, motivational speaker and the founder and Executive Director of SPACE on Ryder Farm, a nonprofit artist residency program committed to supporting and developing artists and activists and their work. Housed on 130 acres of organic farmland in Brewster, NY, SPACE has quickly become one of the premier centers for new play development in the country. Additionally, she has developed and taught curriculum for The North Carolina School of the Arts and NYU. In ‘13, she was the chief of staff for the Beijing International Screenwriting Competition. In ‘15 she gave a talk at TEDx Broadway. Emily holds a BFA from UNCSA where she is the inaugural Kenan Arts Research Fellow. She’s on the Advisory Board of the Auschwitz Institute for Peace and Reconciliation and is on the Board of Directors for Ryder Farm Inc., the entity that owns Ryder Farm. www.spaceonryderfarm.org